Scientists of the University of Göttingen and of the University of Regensburg developed in collaboration a proprietary anti-CCR2 antibodies for the therapy of Multiple Sclerosis (MS) and potentially Rheumatoid Arthritis (RA). The lead candidate Doc-2 has been humanized in collaboration with the MRC Technologies. It targets the CCR2 receptor and modulates the autoimmune process through depletion of CCR2+ monocytes.

We achieved successful in vivo Proof of Principle with primates (marmoset), showing improvement of clinical score, good plasma levels of the humanized Doc-2 antibody, a sustained depletion of CCR2+ monocytes and no undesired side effects.

Multiple sclerosis (MS) is a chronic demyelinating disease of CNS of unkown etiology. MS destroys mainly the myellin layer which normally protects nerve fibres and helps them to conduct electrical impulses. MS involves repeated episodes of inflammation of nervous tissue. This damage decreases transmission of messages leading to diminished or lost function. Hidh dose steroids/ glucocorticoids in acute MS does not show improvement of MS symptoms in 40% of patients.

Worldwide it is estimated that there are > 1 million cases suffering from Multiple Sclerosis (MS). The world market for MS is estimated to be 3.0 billion US$ corresponding to an annual growth rate of 20%, making it one of the fastest growing CNS therapy areas. The prevalence of MS varies widely by geographic region, achieving up to 170 per 100.000 in the UK. Key countries are UK, Germany and U.S.A..

We offer a proprietary humanized anti-CCR2 antibody (DOC-2) for the therapy of Multiple Sclerosis (MS), acute exacerbations of MS, Rheumatoid Arthritis (RA), and potentially further diseases where CCR2 plays a pivotal roll. These antibody recognizes and binds to a 3D epitope in the loops of CCR2 and modulates the autoimmune process. 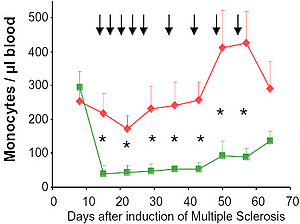 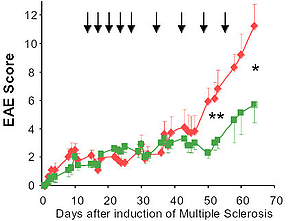 These anti-CCR2 antibody is being developed for ther therapy of Multiple Sclerosis (MS), acute exacerbations of MS, Rheumatoid Arthritis (RA), and potentially other diseases, where CCR2 plays a roll, like e.g. DSS collitis, intracerebral hemorrhage, lung injury, vascular injury, myocardial infarction.. The future treatment of MS will be less focused on beta interferon injections and opens the door to novel therapies. Novel therapy areas offer specialty pharmas a niche in which to compete.

Humanized anti-CCR2 antibody (Doc-2) available incl. its production process. Doc-2 is the lead candidate out of a set of antibodies which has been humanized by framework swapping by the MRC Technology and selected to bind both, human CCR2 on PBMCs and marmoset CCR2 on PBMCs.