To protect the material at the backside of a workpiece during laser drilling or cutting, an absorbing material is used. Here a nanoparticle-suspension provides a particularly efficient protection with further advantages like cooling.

During laser drilling, material situated behind the bore can be easily damaged by laser radiation. A common problem, for example, during the manufacturing of injection nozzles. To prevent the damage, a material which absorbs the majority of the laser radiation is placed at the working side. The material can be a solid which typically absorbs almost all of the radiation but has the disadvantage that it cannot be used if the geometry of the workpiece makes it impossible to place a solid material behind the bore. Furthermore, the solid has to be replaced from time to time. Particle suspensions are a more flexible alternative. However, to achieve a sufficient absorption rate, the particle concentration has to be high. A high particle concentration leads to a very viscous liquid and thus the liquid flows slowly. In consequence, the risk that the liquid evaporates locally and the protection fails is increased. 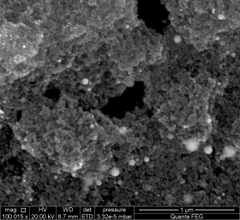 At the Laser Zentrum Hannover a particle suspension has been created containing nanoparticles which offers excellent absorption properties. The high shielding efficiency is caused by plasmon resonance which occurs for example if gold-nanoparticles are used. Due to their small size, the nanoparticles are not further fragmented by the laser radiation. The suspension can thus be used indefinitely. The suspension has a low viscosity and is thus also ideally suited to be constantly pumped through the working area. This flow offers the additional advantage of cooling and removes the debris caused by the drilling. Gold-particles with a diameter of 5 nm offer the best protection at a laser wavelength of 515 nm.In order to achieve better wavelength coverage, the concept has been expanded. The gold particles attach to the surface of the microparticles. Thus, absorption properties of the protective medium are extended to the range of 1064 nm. The Figure 2 shows the combination of gold and titanium oxide nanoparticles. Furthermore, the method can be combined with various nanoparticulate components, having absorbent properties, and with different microparticles. The solvents can also be varied (water, oils, organic solvents).

The efficacy of the nanoparticle-suspenison has been demonstrated in several tests and experiments.

For BR, KR, IN and JP is (2) the only remaining applicant.